Working the County Beat – A View from the Top with Sheriff, Brian Pixley 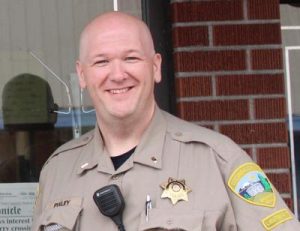 There are three things you notice immediately when meeting Columbia County Sheriff, Brian Pixley, elected to his first term in November 2018. He has a warm smile, a hardy handshake and he sports a large tattoo based on Disney’s Nightmare Before Christmas characters that he wears with pride. All these things have one thing in common – they are who he is. The tattoo symbolically represents his family, all three of his children, his wife of twenty-five years, Annette, himself and even the family dog, immortalized in a colorful arm display. There’s a genuineness and a satisfaction in his voice as he gestures to his family tattoo. “We’re a Disney family,” he explains with a grin. “We’ve been to Disneyland and Disney World many times. We don’t do (a lot of) pictures, so we do this.”

In 1994 the Pixleys moved from Newport Oregon, to the Portland area. It was a return of sorts for Brian, a graduate of David Douglas High School in Southeast Portland. In 2003, the Pixley family relocated to Columbia County and since then, Sheriff Pixley has worked for the City of Scappoose Police and for the Columbia County Sheriff’s Office (CCSO), working his way up the ranks, culminating in his successful bid to be elected as sheriff in last year’s election. He’s met the challenges facing the Columbia County Sheriff’s Office by carefully blending both optimism and pragmatism.

“We’re in a real ‘Catch-22’,” Pixley says, referencing the phrase from Joseph Heller’s 1961 novel by the same name for a paradoxical dilemma. “Businesses would like to relocate here (in Columbia County) but there’s a lack of services due to our tax base.” Without an expanding tax base, Pixley notes, it becomes difficult to introduce innovations to services and programs that would keep Columbia County competitive with other locations vying for business growth opportunities. Sheriff Pixley is a strong advocate for agencies working together to accomplish jointly beneficial goals that once had to be sidelined due to the burden of costs. He states that, “Here in Columbia County necessity has had to become the mother of invention to find a way to get things done.” One of the prime examples of interagency cooperation can be seen in the Life Lessons life skills program taught and managed through the Columbia County Jail.

In Life Lessons, inmates receive life skills training, parenting and anger management classes, as well as drug and alcohol treatment. All participants reside in a particular pod while in jail to enhance support and the feeling of community. “The program tries to give them the skills to choose rational thought over acting out,” Pixley explains. “We have our third class of inmates graduating soon.” While he’s proud of the Sheriff’s Office’s track record with their inmate graduates, Pixley recognizes that nothing assists an inmate’s success like witnessing the success stories of other inmates firsthand. “I’d like to start a mentorship program to encourage the next group,” he states.

In response to citizen’s concerns about the treatment of the incarcerated mentally ill, the Sheriff’s Office, in conjunction with Columbia Community Mental Health (CCMH), opened an office inside the jail to make certain there were mental health services available to inmates as well as a resource addressing the concerns of the jail staff. While cuts hamper the ability to staff the office for a full, forty hours per week, Sheriff Pixley is working to increasing CCMH’s hours of operation inside the jail to full time. The deputies in the Columbia County Sheriff’s Office have completed training that assists them in their interactions with inmates suffering from mental health issues. Pixley sees this as the best of ‘stone soup,’ where one agency brings what they have to the mix, helping to create more long-term solutions than each agency can accomplish on their own.

While Sheriff Pixley has no immediate plans to completely overhaul existing programs and departments within the county sheriff’s jurisdiction, he does have a list of new ideas and modifications to current programs and procedures that he’d like to enact. Youth outreach is one of his prime areas of interest he explains, and he would like to begin that outreach by involving area young people in a search and rescue corps that could eventually work into a cadet program. He also has nine action items written on the white board of his office that he can miss seeing every day. It’s an impressive list which includes the formation of a Cell Extraction Team – deputies specially trained in negotiating techniques as well as physical policing skills to safely extract a combative inmate from a cell when they pose a risk to other inmates, themselves or to jail staff. The sheriff will also assign liaison deputies to work with specific citizen watch groups in their assigned patrol area in the outlying parts of the county.

Cross training is a key component in a sheriff’s office with staff and funding issues. Sheriff Pixley intends to see that all his deputies complete FBI hostage negotiation training, and is also working to develop and implement professional standards reviews for his staff. These are just highlights from his list. When asked how many of the nine items he believes he can accomplish, he gives his trademark grin and says confidently, “All of them.”