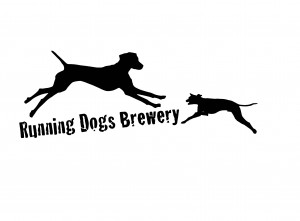 The Run Down on Running Dogs Brewery – Twenty Minutes North of Portland – Craft Brewing is Open for Business. 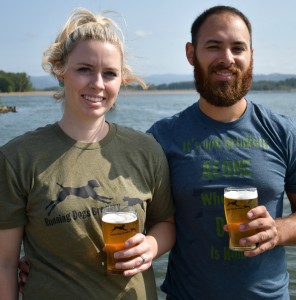 At first you might be fooled into thinking that the new dog-hip craft brewery in St. Helens, OR is run by some “kids” just having millennial fun. Jaron and Maggie exude friendly charm and genuine home grown sensibility, but when you take a glimpse inside their world you quickly realize they are astute and progressive and have identified their objectives and key results for a successful business. They smile brightly and are enthusiastic about what they are doing in St. Helens, OR, the little city with the big river views. I ask Jaron how he got interested in craft beer and he gives a bit of a laugh as he explains. Double tap expand.

Jaron started brewing his own beer in 2011 and he really liked it as a hobby. He had a background working in production supervisor capacities both in the military and at Talking Rain before he moved to the area. Maggie was busy in retail where she kept her head down and her mind in gear leading to successful management positions all the while earning her degree in 2015 in Business Administration. In 2014 a job brought them to St. Helens, OR. But, both of them yearned to control their own destiny. Pause.

Swipe right. One day Maggie said, “Hey, I think we should open our own taproom.”  Jaron had dreamed of this but was surprised to hear Maggie was on board so soon. They started to look for a location.

They came up with the name Running Dogs Brewery while home brewing and always knew that would be the name if they became a commercial Brewery. Their dogs, Gionia an Italian Grey Hound and Winchester(aka Chester) a Vizla, didn’t seem to notice all the fanfare, but  it is their silhouette that became the brand mark born from a few clicks of magic on Photoshop. Now they had to build a successful business plan and find some money.  Swipe right.

Fast forward seven months later and their biggest concern has shifted from how to survive to being able to brew beer fast enough. This is a good problem to have in the competitive craft brew space. Jaron doesn’t have the luxury of huge tanks to produce his beer in; however, that also means Running Dogs Brewery won’t be boring their customers until they finish the last drop of a small kettle batch either.

Jaron and Maggie are getting creative with their unique flavor inspired beverages. Chantrelle mushroom Pale or Cherrywood Smoke Stout end up being best sellers alongside a Kolsch with citrusy mouthful of blackberry and blueberries. They like to play around with interesting tasty toppings on the glass rim and their creations have been a hit with the customers. It’s appears to be uniquely innovative craft brewing at its best and encourages people to come back and try the next delicious thing. New ones in production are thoughtfully explained. A lemony beer might go best with a rim of freeze dried boysenberry and a hint of caramelized sugar. We immediately agree, “Yes, please.”

Running Dogs Brewery has the best meat and cheese boards in the county and their sausages are the best in the entire world.  We discovered this after drinking multiple beers and playing cribbage for 5 hours with no bathroom breaks. Well actually I lie, we did take one break to see if we needed to plug the meter. Oops! Did we mention Free Parking is bountiful? Could we have found beer nirvana? Our fisherman’s knit sweaters never seemed to be as white. But back to the story. We both swipe left. Ah, is this also the place to meet a life time love? Stop it. Swipe left.

Although Jaron and Maggie don’t have any children of their own they certainly have a genuine locally supported family following. Inside Running Dogs Brewery a plethora of stacked colorful, more than slightly used game boxes fit snugly onto the shelves ready to inspire playful quality time. Sure you could do this at home, except it’s way more fun at Running Dogs Brewery.  Your friends might be there too and you won’t want to miss out if they already bought you a beer on the big black board. The kids can play together while you talk or pick up a game too. You can pretend it doesn’t matter who wins while secretly vowing to not drink much as your “secret weapon” and express ticket to the bragging rights. The brewery gear is a great hit among supporters and friends and often becomes an onsite purchase for the best of a grudge match. Would you bet a hat on that? We bet a game and one of us became a member of “The Dog Pound.” This means every time you order a beer it is actually from a personalized glass kept on site and a 16 ounce pint magically grows to a 20 ounce glass. Sorry, somehow this doesn’t seem like anyone lost. Next time we won’t play cut throat.

Running Dogs Brewery also has a hot live music scene and tons of trivia nights that will make you want to watch before looking like you thought you knew something. It’s brings out the geek or the “Game Night” in anyone with a pulse. The persona of this place culminates with the charming Germanesk wall mural with hidden dogs to find, but the real draw is the family affair that has been born between the beer, the adults, the kids and the games. It’s a spot where the words, “Go play,” doesn’t involve a slimy ball being returned, or the kids getting the brush off while adults talk. We predict Running Dogs Brewery will be your next best friend and you even might find someone else that swipes right sitting across the room.
As we walk towards the door we drag our feet a little, like kids not wanting to leave the playground, but then someone suggests a walk on the waterfront and we perk up. Less than a block away we walk along the rivers edge where “The Columbia Slows Its Roll” and imagine that this little place is likely to reveal it’s secrets to the proximity of Portland shortly. For now we catch a glimpse of a huge ship held up by the rivers’ power and plan our return to kick some butt on the “Apps You Need To Know” trivia night coming up. We know it will be a win even if we don’t and we know we will sip right.