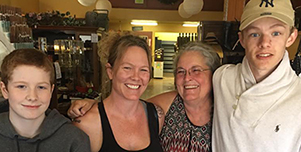 You’re likely to find Mitzi Ponce on her perch behind the cashwrap at 2Cs Vendor Mall; but she hasn’t always been there. Mitzi started her life overseas and for the first six years got a taste from the other side of the pond. Her father was military and this lifestyle afforded her a different perspective on life that has benefited her cheery attitude and business style. After the family returned to the United States Mitzi moved to Austin where she was greeted most mornings by the conflicting smells of gunpowder and baking bread. Her home was located by both the school and the military facility.

Eventually, Mitzi ended up in East Carolina with her daughter where she studied a variety of subjects that ended with bachelor degrees in Computer Science, Biology, and Philosophy. Yes, you read that correctly. She also worked as an intern for the department head at the University. While working in the research department, IBM came calling and Mitzi was an easy pick for their team. At the time IBM didn’t think they were hiring enough undergrads. With a chuckle, she says she was the oldest intern at IBM in their software innovation lab.  Home life was busy with work sometimes beginning with 4 a.m. calls and training on c suite level in India followed by China data companies solutions. The afternoons were filled with the West Coast and Mexico clients and then on to Japanese colleagues. It was often a 4 a.m. to 9 p.m. gig. After almost 10 years Mitzi hung up her three letter company and its routine to make a move to be near family. Currently, her son and daughter live close by and they are the ones we might want to thank for bringing Mitzi to town.

Mitzi bought the 2Cs Vendor Mall when she had the chance and this fulfilled a lifelong passion of hers. Antiques. The 2Cs Vendor Mall welcomes all kinds of interesting items from days gone by. “I just love helping folks find things that they collect, whether it’s barbershop poles or vintage metal cars,” says Mitzi, “I get a kick out of that and it doesn’t get old for me.” While her favorite customer might be a dog named Lou Lou that runs for Mitzi’s door the minute it turns the corner of St. Helens Street where greetings and treats are received, she really feels a bond with those that come, return and come again. Many of her customers make 2Cs Vendor Mall a part of their collecting journey and they do become like friends. There is something special about the way that Mitzi and her staff serve their customers – they all have likable and engaging personas.  Free coffee might also have something to do with that. A fresh pot is always on and customers are welcome to it. After a journey to the store a coffee is usually welcomed and gives people a minute to collect themselves and visit a minute before pulling themselves together to carefully look through the over 60 different vendors’ wares within the mall. Her favorite time of the year is late summer when it is hot outside. Mitzi says the reason she likes this time of year is that, “The store is cool inside and when people come in all overheated we offer popsicles and lemonade, there is just something about that I really enjoy. It’s just an old fashioned feeling of community.”

Part of Mitzi’s success can be given to her background and acumen for business and the knowledge of operations; she is very much into expediting and evaluating store activities. The biggest change has been in increasing her store hours. “The one thing I would tell retail business owners in St. Helens is to be open, build a habit for customers that they can find you open. Once you show customers you are committed to being open for them they become loyal shoppers,” she says with a smile on her face. One reason it’s become important for her to be open 7 days a week is a result of the month-long Spirit of Halloweentown celebration. “After the first year we really started to have a huge crowd…  we could afford to stay open longer, and then we could serve all the returning shoppers. We have returning customers that came here for the second, third and fourth time every week following that original Halloween month. They want to shop when it’s not so busy and they like that the store continues to offer up new gems along the way. Halloween sales provide just about six months of income in one month, and I now have a waiting list of people that want a spot inside the mall,” she said. She adds that “St. Helens is a good place to do business and the City of St. Helens is getting easier and easier to do business with, the merchant meetings have really given a voice to us who want to be heard, the activities have gotten better and better and it’s not often a place of this size can create this number of tourism guests.”

Mitzi dreams of an elevator in her 3 story building and making more improvements for customers when they visit. On the occasional day off Mitzi finds family at the forefront of her day. She loves spending time with them and her son recently moved to the area. There are many things that engage the heart and few that engage the soul. I get a lift every time I see those kids she said. I feel very lucky that I have a complete passion for what I’m doing whether it’s in the mall or just watching those kids. They both make me smile.

2C’s Vendor Mall is located on First Street across from Columbia Theater in St. Helens, OR. They are open 7 days a week.