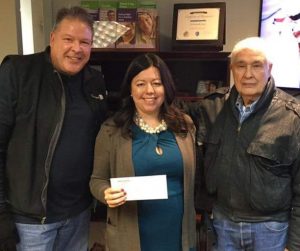 A Conversation with George Hafeman Jr.

St. Helens resident, George Hafeman Jr. has never been one to let grass grow under his feet for a couple of reasons: First, he came to understand the value of property early in life and second, he likes to keep busy. Getting him to stay put long enough to talk can take some coordination because even at seventy-six, an age where most of us plan to spend our days relaxing under palm trees, Hafeman sits on the board of Scappoose Economic Development while heading up the three offices of Windermere/ St. Helens Real Estate with his brother and co-owner, Mike Hafeman. George Hafeman’s response to all queries about his retirement plans is a standard, “Why would I do that?”

Hafeman has always been active and can’t see his life any other way. “Independence helped me,” he says. From early childhood, living abroad in a military family, he explored much of the world on his own, in both post WWII Austria and Japan. His spirit of independence often served him well in his career paths. As a pre-med student at the University of Oregon in Eugene, he worked at a sorority house preparing food and doing dishes to pay for his own room and board. While enrolled in pre-med studies, he met and married his wife Judith. “She would bring my lunch while I was working with the cadavers,” he recalls with a grin. “She refused to come in (the building) so I would meet her out front.” As Judith kept them together body and soul, Hafeman worked two and half nights a week at the Weyerhaeuser mill, in Springfield to pay for college and support them. Ultimately, financial considerations changed his course of study from medicine to education. It was challenging to say the least, but when he graduated with a degree in education in 1966 he graduated debt free.

After coaching and teaching both math and physical education in California, Hafeman and his wife relocated to Newberg, Oregon where he taught math, as well as coached football, basketball and track. In 1971 George began selling real estate during summer recess, and also bought an insurance agency. “Like I didn’t have enough to do,” he quips, “but I like being busy.” In 1978, they moved to Columbia County where he joined his father, George B. Hafeman, Sr. at St. Helens Real Estate, a brokerage his father started in the mid-seventies. In those days Columbia County was quieter and far more rural than it is today. Hafeman Jr. states that building four houses back then earned him recognition as the biggest builder in the county. Since those days Hafeman, along with his brother Mike have sold countless properties and expanded their father’s company, St. Helens Real Estate to three offices now operating under the Windermere banner.

When asked about growth in Columbia County Hafeman spoke enthusiastically about the future and the partnership formed between Portland Community College, Boeing and the City of Scappoose. “Portland Community College is very progressive. Scappoose is the growth area right now, but with Boeing, it (the opportunities) will ‘leapfrog.’” He looks for the spillover, or leap frog effect to benefit the other communities of Columbia County, but cautions that the opportunities presented require preparation through education and innovation. He cites Cascade Tissue, located in St. Helens as a prime example of the future in manufacturing and long removed from the old notions of assembly line production. “No industry is safe from the mechanization coming in the future,” he warns. “At Weyerhaeuser I drove a forklift, but at Cascade Tissue a robot drives the forklift now. In ten years industry will look totally different. We don’t even know what that will look like yet.”

Hafeman sees a need for modern educators to shift the direction of education for today’s students in order to prepare them for an industrial landscape where manufacturing jobs require technological expertise rather than physical stamina or manual dexterity. Embracing technology is key in Hafeman’s book – not surprising given his early adopter status in the field of real estate technology. He also believes certain conditions are necessary for creating an environment conducive to growth opportunities: First, a progressive attitude towards new ideas and systems, second, a competitive fee structure, combined with a streamlined permitting process.

Economic development isn’t the only area where George Hafeman chooses to be of service to the residents of Columbia County. Under the umbrella of the Windermere Foundation, he, his brother Mike, and their agents work to assist Columbia County’s disadvantaged children, families and seniors by providing emergency assistance through programs like their “Share the Warmth,” coat and blanket drive. This year the popular, Windermere Masquerade Ball raised more than $20,000.00 to assist approximately forty-four local charities. Hafeman acknowledges that the need for assistance is great within this county and insists on a hands-on approach to giving. “I vet the requests for assistance myself,” he states. “There’s a lot of need and all the money we raise stays right here in Columbia County.”

Hafeman credits his desire to help others to his childhood spent in post-war Japan and Austria. George Hafeman Sr., a Lieutenant Colonel in the U.S. Army, served in both countries as part of the United States plan to rebuild both nations. “We lived in the American section,” Hafeman Jr. recalls, “but my Dad would frequently travel and sometimes, he’d take me with him.” These were eye-opening experiences for young George – ones that have stayed with him for life. “We would go to the Japanese schools and there would be children there deformed from the atomic bombs. In Austria, they were living behind the Iron Curtain. They had nothing.” While Hafeman remembers taking these situations in stride at the time, he looks back and knows they not only created his desire to help others, but to understand what it takes to rebuild on a grand scale. As George Hafeman looks out on Columbia County today having witnessed both its past and present, he looks towards to helping secure its future.