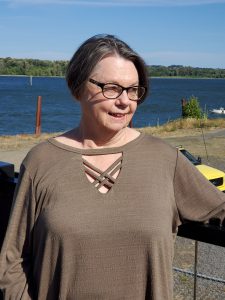 Long time community member and 7 year City Councilor Susan Conn finds herself literally heading for the hills. At the end of the month she and her husband will be relocating to the Sierra Nevada Mountains to a picturesque comfy cabin that resembles tales from faded story books. As she creates piles of “keepers” vs. “charity” she reminisces about the days when her own children ran around the neighborhood and bore the results of being raised by the whole community.  “It was a small town and everyone knew who you were and who your kids were. If they were doing something they ought not be doing you’d likely get a call.” People still move to the area for that small town feel. When the mill closed, she shares, that impact was so far reaching that it is still being felt today. People moved, some people stayed, but the community kept the mindset of survival and closeness. It made everyone that much more mindful of the interdependence of people in a small town.

“I fell in love with St. Helens on my first visit here and have never recovered. This was a city of parades and festivals, full of friendly people, little crime, and summers packed with activities in an area of natural beauty. We have many parks within walking distance of much of the population and we have the Columbia River, a working river that honors its heritage but also offers so many recreational opportunities. We are blessed. I am blessed to have been allowed to participate in preserving our past and planning for our future,” says Susan.

Susan spent many hours volunteering and participating on boards in the community. Before she became a city council member she had already committed service to the Commission on Children & Families, the St. Helens School Board and other non-profits that taught her how boards worked and that boards are very dependent on the relationships that can be built. There would always be different perspectives, options, opinions, and ideas on every subject. She found that the trick was to find common ground and find a way to respectfully work together for the common good of the citizens.

Susan was appointed to the Council by the other members after the passing of Councilor Phil Barlow.  “Although we couldn’t have been more different in personality & approach, what we had in common was that we both sincerely loved this city and wanted to preserve the good while leading the city in a new direction.”

When appointed she was the only woman on City Council, so had to earn her stripes. “I credit former fellow Councilor Patrick Martyn with guiding me through the first year, for as long as he was able. He patiently answered all of my questions and set the bar high. I stepped into the committees on which he had served and was told I had big shoes to fill, and I did, indeed.”

She learned quickly that the regional partnerships were key to moving projects forward that would benefit the City of St. Helens. A cornerstone to her success in the first term was the realization that councilors are elected to represent not just those who elected them, but all citizens. It’s always a balance of listening to not only the voices that agree; but the ones who may not and pledging to work for the best outcome for all.

After winning her second term Susan was fully engaged and participated in varying degrees to help and improve the operation of the Municipal Court to align more closely with the County and District courts and with the State, to better meet the needs of the people it serves.

Her most primary accomplishments didn’t stop there.  She also helped the City of St. Helens and St. Helens School District work together to build a recreation district to serve adults and children. Another collaboration came with then Police Chief Moss, other law enforcement as well as mental health providers, who along with the judicial system, formed a Crisis Intervention Training Program. This training taught de-escalation techniques to law enforcement officers to better equip them to deal safely with people experiencing a mental health crisis. Perhaps the most visible project that she participated in was the purchase of the Boise property which is set to allow an amazing development with public access to the river for the first time. One key factor being that the greater community was involved directly in the planning.

Susan says that she feels the future will lead to a more locally served community with even more resources as people change tactics to survive the new world we are seeing today. When you feel a loss of control as we are experiencing it often begets a need for change.  One of the changes she sees is the demand for more local businesses to serve the community and alleviate the need for outside sourcing of goods and services.

Although not happy she didn’t get to serve a third term on council, Susan is seeing life through a different lens now, with a focus on family. With that in mind she will move closer to her tribe. It will be a completely different view when she looks out her window. The river view will now be replaced by green trees and have the scent of cool mountain air. I asked her for a hint for Council in the future, “Put your egos, biases and personal opinions aside and do what is best for most, read your packets prior to meeting – be informed and prepared, and always remember you represent ALL citizens, not just the loudest ones,” and with that she looked at an old framed photo of the family in front of the river and smiling says, “Keeper”